We have selected 4 of our Golden Ales for this Bundle:

Hurricane – 4.1% – IPA – A refreshing IPA brewed with Mosaic & Citra Hops, this beer packs a Citrus Punch, Oats in the Mash give a smooth mouthfeel and plenty of body to the Beer, this is the perfect beer for drinking in the sun. Ingredients: BARLEY, HOPS, YEAST, WATER

5 Gold Grains – 5.0% – Festive Golden Ale – A Golden Christmas Ale brewed with a selection of different grains to give this beer plenty of Festival Character as well as some Orange Peel to give the Beer a little Christmas Zing. Ingredients: BARLEY, RYE, OATS, MAIZE, WHEAT, HOPS, YEAST, WATER 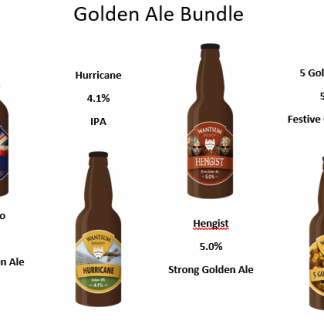